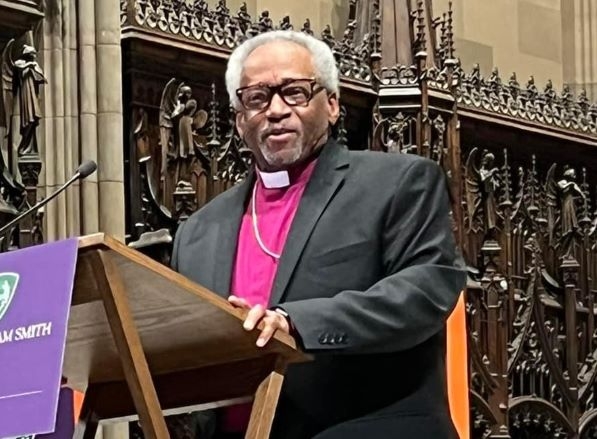 Today the Supreme Court released its decision in the case of Dobbs vs. Jackson Women’s Health Organization. The court has overturned the constitutional right to abortion that was recognized in the seminal 1973 case Roe v. Wade.

While I, like many, anticipated this decision, I am deeply grieved by it. I have been ordained more than 40 years, and I have served as a pastor in poor communities; I have witnessed firsthand the negative impact this decision will have.

This is a pivotal day for our nation, and I acknowledge the pain, fear, and hurt that so many feel right now. As a church, we stand with those who will feel the effects of this decision—and in the weeks, months, and years to come.

The Episcopal Church maintains that access to equitable health care, including reproductive health care and reproductive procedures, is “an integral part of a woman’s struggle to assert her dignity and worth as a human being” (2018-D032). The church holds that “reproductive health procedures should be treated as all other medical procedures, and not singled out or omitted by or because of gender.” (2018-D032). The Episcopal Church sustains its “unequivocal opposition to any legislation on the part of the national or state governments which would abridge or deny the right of individuals to reach informed decisions [about the termination of pregnancy] and to act upon them.” (2018-D032). As stated in the 1994 Act of Convention, the church also opposes any “executive or judicial action to abridge the right of a woman to reach an informed decision…or that would limit the access of a woman to safe means of acting on her decision.” (1994-A054).

The court’s decision eliminates federal protections for abortion and leaves the regulation of abortion to the states. The impact will be particularly acute for those who are impoverished or lack consistent access to health care services. As Episcopalians, we pray for those who may be harmed by this decision, especially for women and other people who need these reproductive services. We pray for the poor and vulnerable who may not have other options for access. We urge you to make your voice heard in the way you feel called but always to do so peacefully and with respect and love of neighbor.

What are you looking for?

These are the first words spoken by Jesus in John’s gospel, directed to a seeker named Andrew. We are all seekers, and while we may not know how to express what it is we’re looking for, we trust that we’ll know it when we see it.

At Church of the Servant, we seek, serve, and celebrate God and each other in a safe and accepting community. We welcome people from various backgrounds and ethnicities, those who are straight, LGBTQ, married, partnered, single, from other denominations and faith traditions, life-long Episcopalians, brand new to church or returning to church after a long absence.

We want you to feel comfortable coming to Church of the Servant for the first time! Whether you are attending your first ever Episcopal service or you “know the ropes,” every church is a little different. Here are answers to some Frequently Asked Questions. And if you still have more questions, just ask! We’re a friendly bunch and were all first-timers once.

God is present in every occasion of our lives. Together we mark these special times with celebrations of worship to highlight the ways in which God is always at work throughout the events of our lives.

Though not like a social or professional organization, the Episcopal Church does have membership criteria. These aren’t meant to say who is "in" or who is "out", but instead, to establish who has taken an intentional step to be part of a worshiping community and who is either still discerning, or someone we should invite to join us on this faith journey!

Hearted Hands - The message “Go in peace to love and serve the Lord!” rings out on Sunday mornings and it doesn’t end there. Being the hands of Christ in the world is an essential part of the shared nature of ministry at Church of the Servant. Stewardship in several forms – sharing of our time, talent, and treasure - is the essence of hearted hands ministry.

Give Now Pledge Card Ways to Give